Songwall recently had the honour to meet the spiritual Sufi music mystic known as Sain Zahoor. Some of you may well ask the question, “What is Sufi music?” Sufi music is no stranger to Songwall, but I only became aware of Sain Zahoor less than a few months ago via Coke Studio prior to his performance at the renowned Birmingham Symphony Hall where I had the chance to meet and ask him a few questions pre his soundcheck. 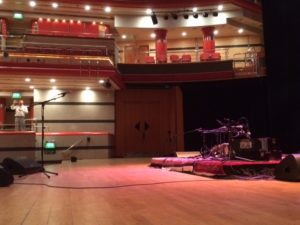 What does one ask someone who is known as a music mystic legend?

Firstly, let’s take a step back, empty the cup and our whole perception of music as we may or may not know it….

In a recent interview with Asian Culture Vulture, Sain says “The essential message of Sufism is love. Love and tolerance. I do not want to convert anyone. I only want people to learn from the verses and chants that I sing, to eschew greed, violence, hate and materialism and to promote love, tolerance and kindness. That is what the great Sufis always preached and what they wrote about…….. All I can do is pray for people who hurt and hate others. That is all I want to sing.”

When you meet Sain you feel an immediate intensity and when he speaks that intensity almost tenfolds.

At the same time, the more I sat with him, the more I felt at peace in his presence as I listened to his passionate Punjabi tones which were translated through his interpretor.

Rather than go through the story of Sain Zahoor you can read it thoroughly here which includes how his journey started when he left home at the age if 13 to find a shrine he had seen in a recurring dream…..

On the day of his performance I had spent some time with music students at Access to Music and we had chatted about their perception of music and the industry. The general consensus is that it’s hard work and very demotivating. Since that day I’ve spoken with more music students and there is a feeling of fear of failure for up and coming musicians that they have to fit into a certain music industry mould.

So from this I asked Sain some questions around this theme:

SW: I spent the afternoon with music students today talking about their perception of music today. A lot of musicians in the West struggle to make a living, it’s all about a different thing, not about spirituality. It’s almost about fitting in to a certain mould. How have you experienced the interaction with the Western world with the Sufi music in this recent tour?

SZ: “What ever this message is, where ever I’m playing or wherever I’m singing; whether this side or that side, whatever language they speak or religion they belong to….there is a universal spiritual message, a connection from God which is present and it has the same meaning for everybody”

SZ: “That is what I am trying to spread, And I wish that it spreads because this mystic music and its teachings can help you learn good things, and help stop you from doing wrong to anybody. You spread love, it’s very peaceful.

SW: What advice would you give to young songwriters / artists

SZ: I’m always happy to try and advise young people, whether they are studying music, poetry or writing. Whatever they are doing, it’s very important to teach them, to encourage them to study and to help them learn. The thirst for spirituality is like a newborn baby’s thirst for milk, or a child’s hunger for food. Music and the message of the saints is one of the ways to quench that thirst in young people, without that young people can become disturbed.

SW: I asked him whether young people are important to him, to get his message out as they are the future of the planet. Should they be interested in Sufi music ?

SZ: There are different kinds of music. One kind is like hot tea, which warms you up when you drink it, it heats you up and inflames your soul. Sufi music is like cool water. It quenches your thirst and calms your soul.

SW: You’ve spent most of your life singing devotional songs to God in Sufi shrines. How do you feel about singing in a more commercial setting, in a performance like this?

SZ: I’m very happy that the words of the Sufi saint and poet, Bulleh Shah, have spread all over the world through me appearing on Coke Studio. The message is the same wherever you sing it, and I am nothing, I am just a means of communicating that message.

So, Sain Zahoor is a leading Sufi musician from Pakistan. He doesn’t speak any English, can’t read or write and as a street performer has been on his musical journey since the age of 13 when he left home. That journey has led him to Birmingham and further afield spreading the universal message of music. Music is the higher language, the connector and when done and performed purely can rise above any preconceptions or language.

The performance was moving, backed by a group of traditional Sufi musicians who sat cross-legged on a platform behind him playing flute, tabla and harmonium. You can see Sain perform in the following video links.

As described by FolkPunjab “Sain Zahoor or Saeen Zahur Ahmad (b. around 1945) is a leading Sufi musician from Pakistan. He spent his life singing in the Sufi shrines, and had not cut a record until 2006, when he was nominated for the BBC World Music awards based on word of mouth. He emerged as the “best BBC voice of the year 2006”, an award that had earlier recognized other prominent Sufi singers such as Nusrat Fateh Ali Khan and Abida Parveen.”